The Ginger jeans pattern was on my radar from when it was published, I loved the skinny version but just didn't see myself making it.  I already have skinny jeans that fit, but prefer more boot cut jeans.  But when I first eyeballed the flares expansion, I nearly fell of my seat!  Big 70s flares a la Led Zepplin - yes please!! 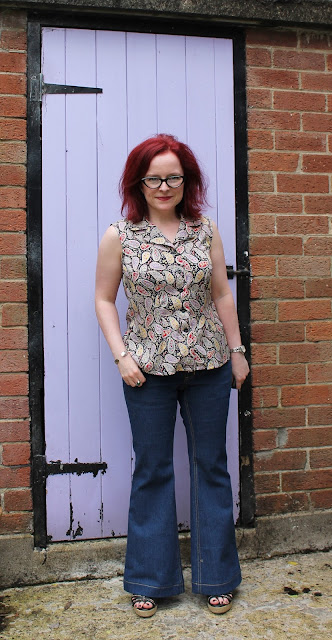 First thing to do was find the fabric.  I spotted this pair that Maeve made on Dress Fabrics blog, and ordered the fabric from the shop.  This fabric is gorgeous, it has 5% stretch and the colour is lovely.  The zip came from my stash, buttons and rivets from ebay (more on them later), and the pocket lining was left over fabric from this dress. It turns out that I have a lot to say about these so I'll break it down.

I didn't make a toile as I didn't have any other fabric that was suitable.  Instead I took some measurements from another pair of jeans that fit me well.  The measurements I took were:

I knew I would have to shorten the legs considerably, and the pattern says to shorten/lengthen the legs from the knee, but I didn't, and I'll tell you why.  Being petite, I find that any regular length trousers with shaped legs end up with the knee being too low on me.  As these jeans are all about the shape, I wanted the knee in the right place, so took these measurements from my old jeans:

Crotch to knee
Knee to hem

I then ruled a line 2 inches above and below the knee - it was 2 inches because that's the width of my ruler.  I then shortened crotch to knee, and knee to hem to my two measurements.  I had to redraw the cutting lines, but below the knee they matched exactly with a smaller size, so it was easy. 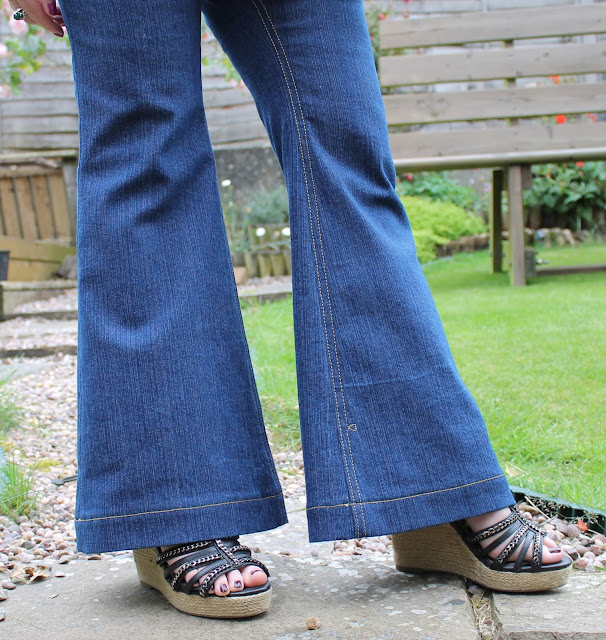 Sewing these was really easy as the instructions are brilliant, as is the sewalong.  The only thing I would do differently, and I'm being really picky,  would be to shorten the width of the interfacing on the right front zip extension.  The instructions say that when you have attached the zip guard to the right fly extension, you then trim a bit off the edge.  Which I did, but then the edge of the interfacing was showing behind it.  I added some bias tape as suggested in the instructions, but next time I will make that bit of interfacing narrower.

I also unpicked my zip and sewed it again, but this was personal choice.  I had sewn a few fly zips before, but they are always a bit confusing.  The instructions said to line up the zip teeth anywhere between right up against the centre front, to (at the most) 3/8" away.  I erred on the side of caution and went with 3/8", but then decided 1/8" would be better because the zip pull was too close to where the top of the top-stitched curve would be on the front.  Which brings me on to top stitching...

Ah, top stitching, you fickle mistress...  What can I say about top stitching?  Well, I kept telling myself that if you're not unpicking it, you're doing it wrong.  I used two spools of top stitching thread, and there were honestly a few inches left on both.  Admittedly, a fair bit of this was practising, and deciding on a design for the back pockets, but a lot was user error.  Here are my top stitching top tips:

1.  Remember to change the stitch length to 3.5 (or whatever your preferred length is) when top stitching.  I kept forgetting.  Yeah...

2.  When you basted the outside seams together to check the fit, and lowered the thread tension to make removing the basting thread easier, REMEMBER TO TURN THE THREAD TENSION BACK TO NORMAL!!!  I forgot.  Then tried to sew on a back pocket, then wondered why my machine, and then I, were having a total meltdown. 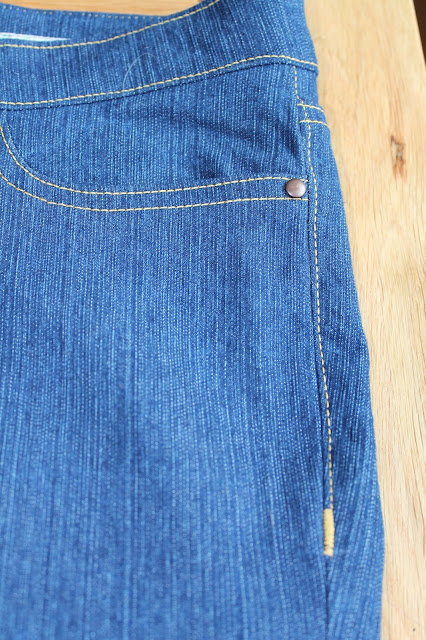 The belt loop on the left was stitched on with normal thread, and the one on the right with top stitching thread. 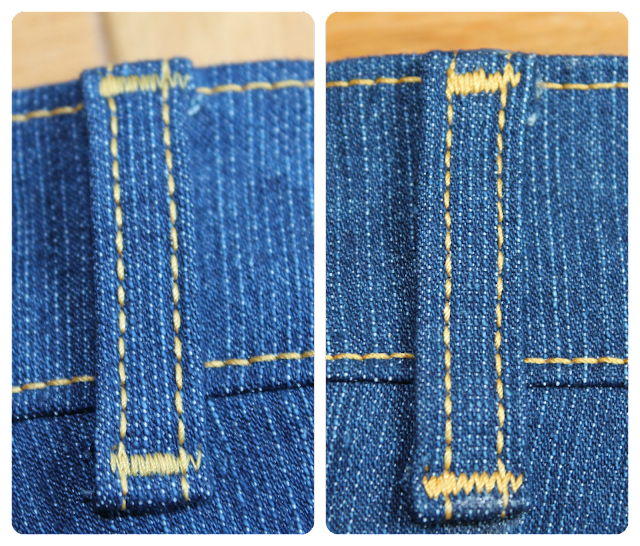 The pattern calls for five belt loops, but I used six because I wanted two on either side of the centre back instead of one on the centre back.  You can see that some of my top stitching is coming undone in the centre back seam, but I'm still waiting for another spool of thread that I ordered on ebay, then I can fix it. 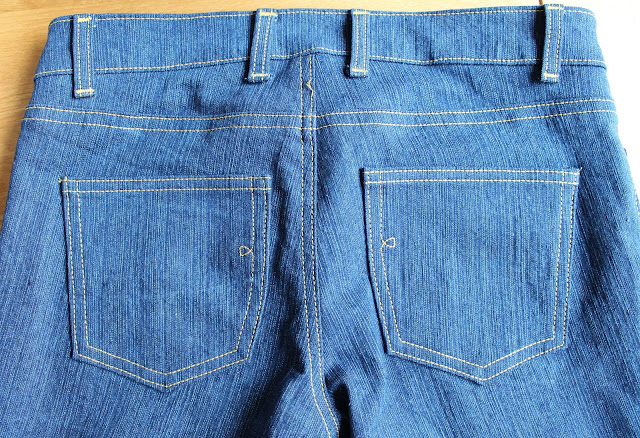 There was much procrastination about the design for the back pockets.  In the end I took inspiration from this pair made by Heather Lou, and used a loop decorative stitch that is on my machine.  I also used it on the inside at the top of the right leg, and bottom of the left, because - why not? 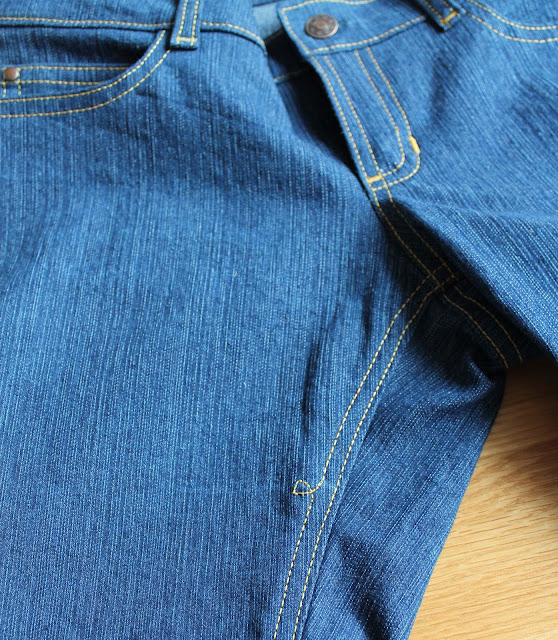 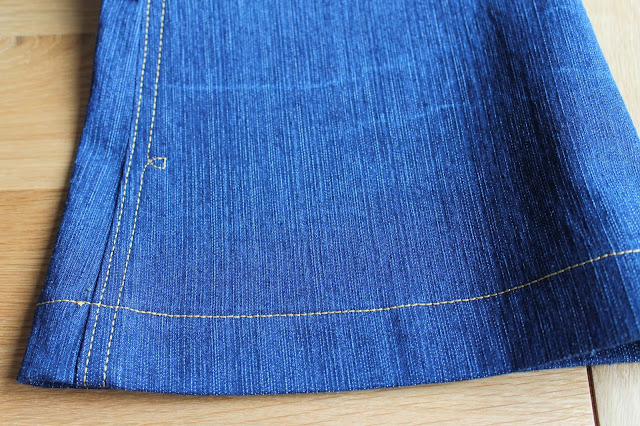 I wish Heather Lou had posted this before I started the top stitching.  The bit about the stitch ripper nearly made me choke on my tea when I was reading it on my phone in work!!  Wise words people!

The pattern calls for a 5 " zip, which I bought, but I had a 4" zip in my zip box and it turned out to be the perfect length.  Which is just as well, because I didn't fancy having to shorten a metal zip. 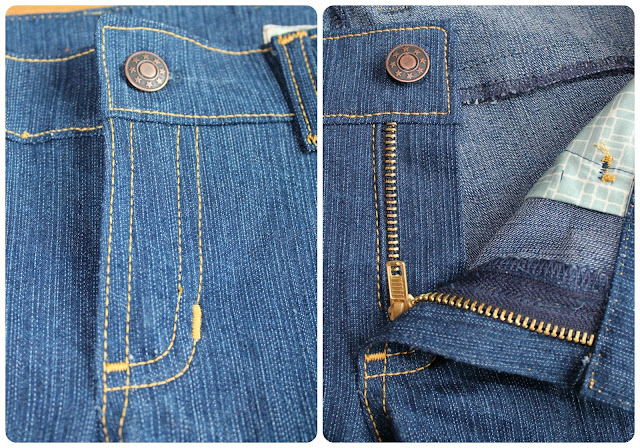 I had got some random buttons and rivets on ebay, but they turned out to be rubbish.  Three of the buttons bent or broke when I was hammering them in, and in the end Andrew put the fourth one in using a vice.  The rivets refused to attach at all.  Again I threw it out to Instagram, and Sian suggested MacCulloch and Wallis, but the postage turned out to be nearly the same as the buttons and rivets!  Maeve suggested Hemline buttons, so I got some of them and some rivets.

Making jeans gets a bad rap as being difficult, it really isn't, but I'll tell you what is - putting in those blinking rivets!!  The best thing I found to use was one of these hole punchers for putting holes in belts. 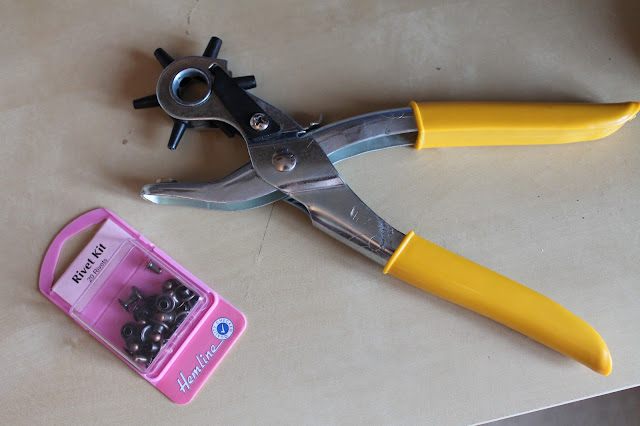 I have only put three rivets in at the coin pocket and outside edges of the front pockets.  I'm going to see how they hold up in the wash before I put them on the back pockets. 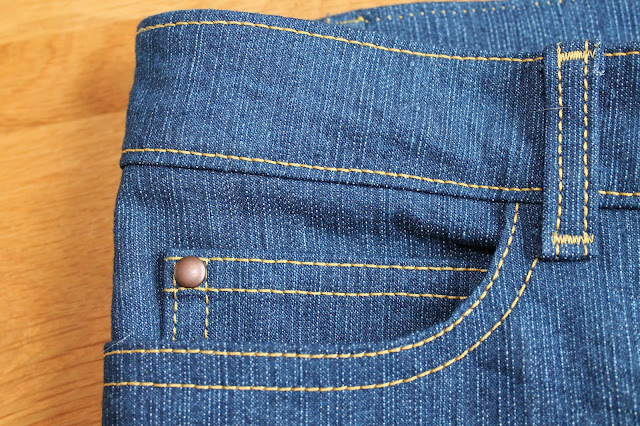 I also made this shirt to go with them because I thought the fabric had a 70s vibe to it.  If it looks familiar, it's because it was left over from my Buchanan dressing gown. The blouse is self-drafted, and I went a bit overboard with the big lapels.  I had to trim them down, twice... 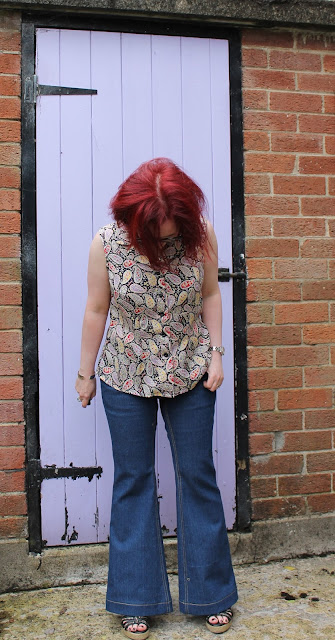 I absolutely love my jeans!  They are so 70s that I had to get my big 70s sunglasses out. 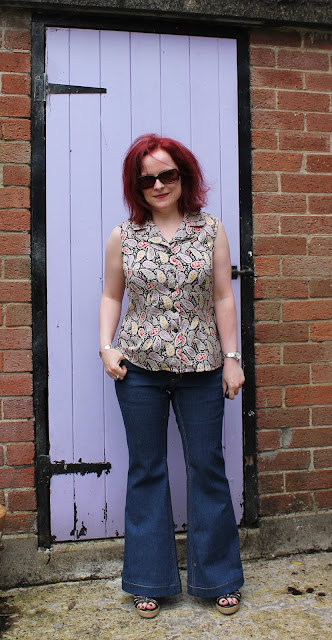 Have a groovy weekend!!
Lynne
Posted by Lynne at 20:51