I had loved this jacket since the class was first released, but didn't buy it then because I was pretty new to sewing.  I did manage to get it during a Craftsy sale, which is just as well as it doesn't seem to be available any more.  The teacher is Gretchen from Gertie's Blog For better Sewing, and if you like the look of the jacket, there is a similar pattern in her book, Gertie's Book For Better Sewing.

I finally decided to have a go at making it after buying this lovely lilac herringbone fabric on ebay for £33 for 5 metres.  It's 65% polyester and 35% wool and was a lucky find, and I knew I'd have enough fabric to re-cut if I needed to.  In the end, I didn't need to re-cut, and the jacket only took 2 metres of fabric.  I made a toile before Christmas, and then spent some time gathering together all the other bits and pieces that I needed.  I had planned to start it over Easter , which I did by cutting it out on Easter Sunday.

I'm delighted with how it turned out, and have a lot to say about it, so I'll break it down.

I did all the hand tailoring when I was off work on Easter Monday and Tuesday.  It was enjoyable, although it did get a bit tedious towards the end. 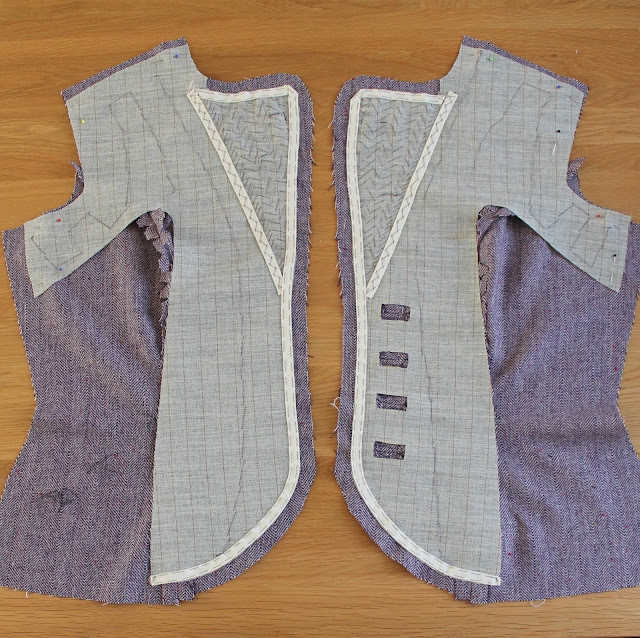 This is both fronts with the pad stitching done on the lapels, and the roll line and edges taped.  I think the bit that turned out best was the under collar.  I didn't take a photo of it by itself, but it stood up beautifully after it had been shaped!

I think I will investigate some different hair canvases for my next coat.  I got this canvas on ebay, but if anybody has any recommendations, please let me know.

The lining is some lilac peachskin.  This is what I had planned to use, but I couldn't find any on the interwebs.  I know!!  So I got some white instead.  Then I considered using some cream silk that I have, but it turned out that the hair canvas showed through, and there was a minor panic.  The good old Spinning Wheel in Belfast came to the rescue with two different shades of lilac peachskin. 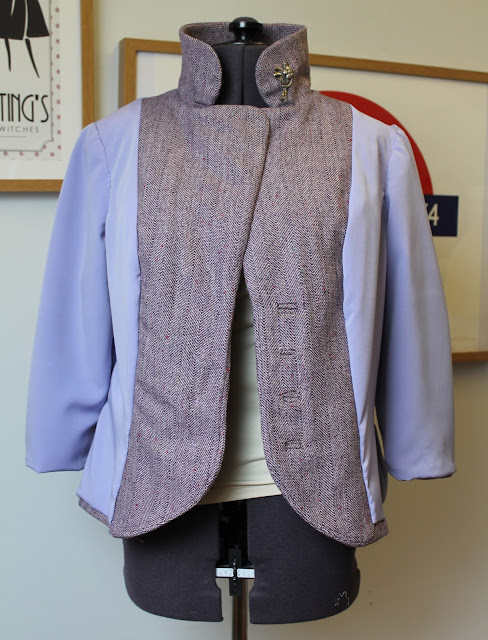 I have come to the conclusion that I do not like sewing welt pockets.  They are fiddly and time consuming.  Also, my tablet computer threw a wobbly when I was at the crucial stage of sewing down the little triangles at each end of the cut into the jacket front.  It just refused to play my Craftsy class, and I ended up having to watch the rest of it on the tiny screen on my phone.

The right pocket turned out well, but I'm not so happy with the left one, and I'm fairly certain that I couldn't be bothered to sew welt pockets again. 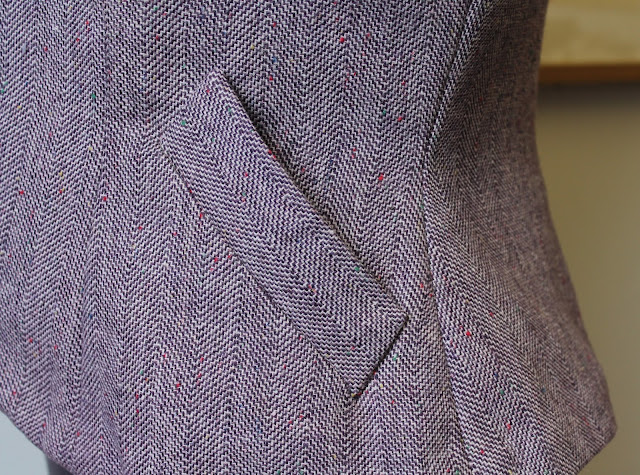 These are made using the patch method.  I think next time I will use the welt method as I think it would give more even horizonal edges.

Shortened sleeves by 1/2" above the elbow dart to raise the dart a bit - and that was it!!  It turns out coats are more forgiving in fit that dresses and blouses!  That said, if I made this again, I think I would go down a size at the shoulders and underarms.

The way the collar is attached is different to a dress or blouse, and unfortunately this bit of the class wasn't very clear.  It did reference an artical from Threads Magazine, which I found here, but predictably I didn't bother looking at it at the time, and just winged it!  It turned out ok though, and then I found some more references to this method in a couple of my books.  I'll know again though.

Setting in the sleeves 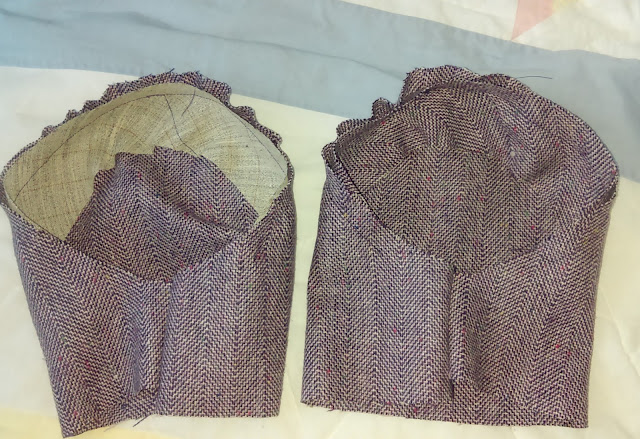 I really wasn't sure how this would fit into the armhole, but it did!  There is a little bit of give if you need to stretch it out a bit, and I was delighted with how the sleeves looked.

This was taken on my phone, but you can see the strip around the top of the sleeve head after the sleeve has been set in. 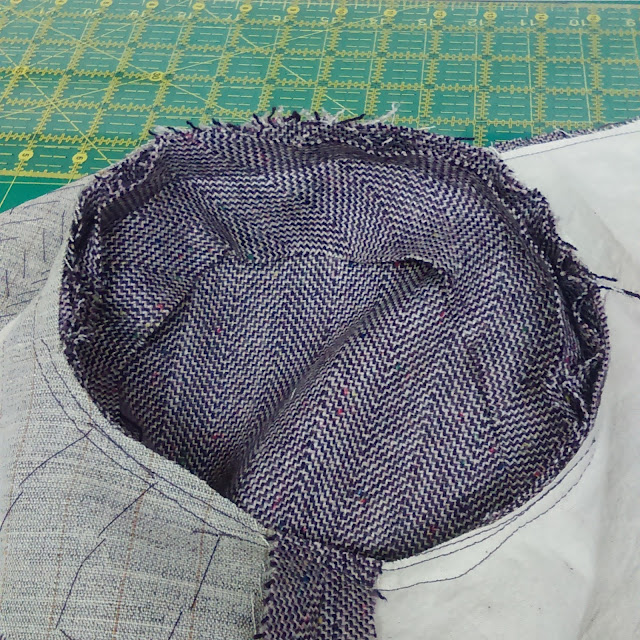 It wouldn't be me if there wasn't some overthinking involved, and with everything that's involved in making a jacket, it was quite a surprise to find out it would be on the shoulder pads.  I had bought some shoulder pads, but when I pinned them in I thought they showed though to the outside.  So I remembered this great post from Manju, and basically copied how she made her shoulder pads.

Then came the sleeve heads which fill out the very top of the sleeve.  I would have sworn there was a bit about sleeve heads in the class, but it turned out there wasn't!  After a lot of doubting my own mind, I realised that they were in another Craftsy class I have.  Then I couldn't decide if it was the right thing to do to add them.  Eventually (and be glad you don't live in the same house as me!) I thought I'd put them in because I could always take them out if I didn't like them.

I forgot to take photos of all of this until everything was sewn in place, and even then this photo was taken on my phone. 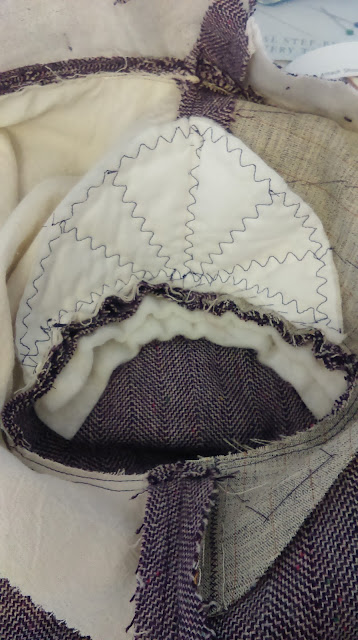 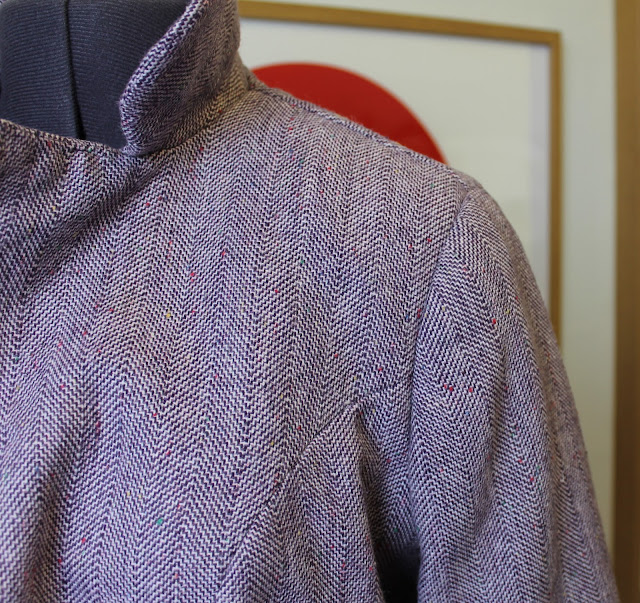 I really enjoyed making this jacket, and it wasn't as difficult as I thought it would be, but it definately helped to have a class to follow along with.  I'm already planning more coats after finding these vintage patterns on ebay. 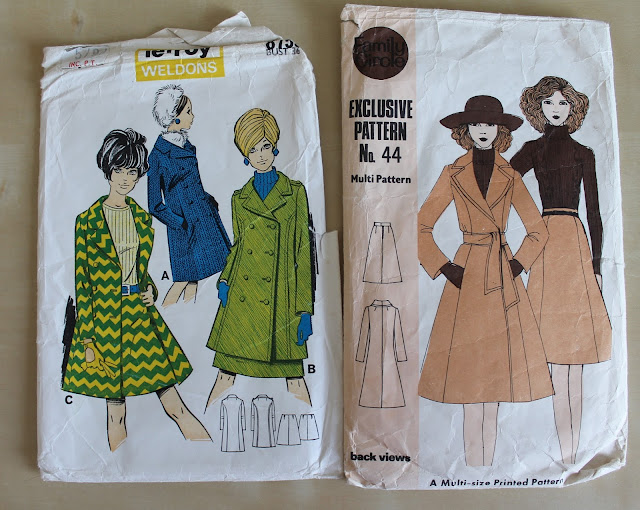 The one on the left was £3.99 and is a single size pattern.  I think it is roughly the right size, but will make a toile first.  The pattern company is Le Roy Weldon, which I hadn't heard of before, but my mum said she remembered her mum having some of their patterns.  It's from the 1960s, and the price sticker in the top left corner say 5/9'; my dad said that worked out at about 35p.  The green coat in View B is the green winter coat of my dreams, and also the lady wearing it reminds me of my mum.


The pattern on the left is from Family Circle which was a magazine that I remember my Granny buying.  This pattern was £2.50, and is a multi sized pattern.  I can see this in a charcoal grey or charcoal purple, although I think I would add buttons and widen the skirt on the back a bit.

Apologies for the slightly wind-swept photos, it's been very breezy today, but yesterday morning we had snow, so I shouldn't complain!  You've got to love the British weather!  And Monday is the May Day bank holiday, so it will be a long weekend of sewing for me.

Enjoy if you're off too!