This is the smug face of someone who has successfully made welt pockets and bound buttonholes!!  The pattern is Oliver + S Woodland Stroll Cape.  I first came across this in May on Sarah from Fabric Tragic's blog, and fell hard for it; then I discovered that Ruth from Nightingale and Dolittle had made a lovely version too.

This cape is shaped under the arms, to form what Andrew called "armlets", and the curve is held in place with a button.  Here's a particularly stupid photo of me demonstrating the shape. 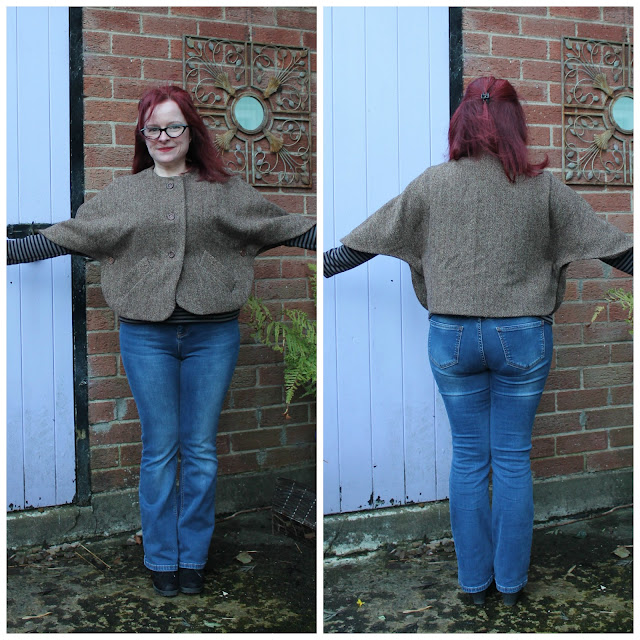 I downloaded the pattern, and taped it together, but realised that it was going to be too long on me.  So I shortened it horizontally across the upper chest and below the bust.  I even made a toile, and was happy with it, but then I was starting my pattern drafting class; and then who wants to make a wool cape during the summer? 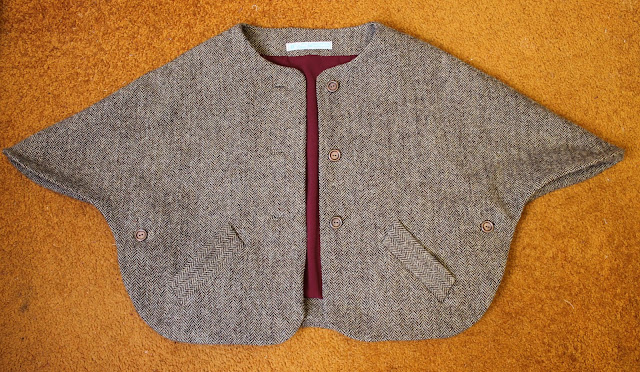 Of course, me being me, I couldn't leave the pattern as it was.  Sarah had mentioned in her post about the lack of facing at the buttonholes.  That seemed weird to me too, so I drafted a front facing - which meant re-drafting the lining, so I thought that I may as well draft a hem facing too.  Because, why not?! 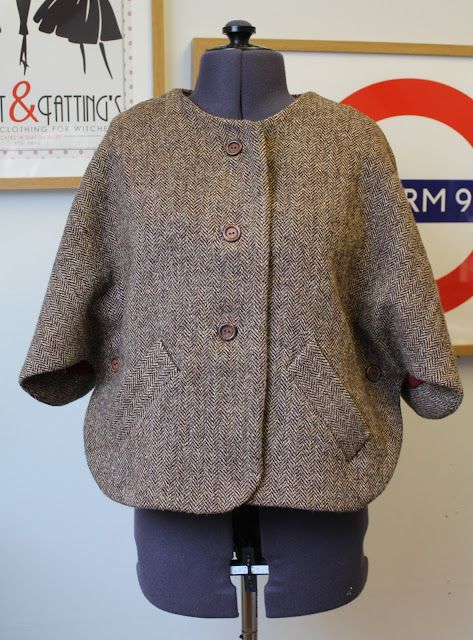 I've recently been watching a Craftsy class on jacket tailoring.  It's called The Starlet Suit Jacket with Gretchen from Gertie's Blog For Better Sewing.  I really want to make this jacket and thought I try out some of the technics on this cape,  which is why it has the aforementioned bound buttonholes and welt pockets (after swearing I'd never make welt pockets again...).

I'm delighted with how they turned out.  The bound buttonholes are made using a fabric patch at the back instead of two welts.  This is the same method as in Gertie's Book For Better Sewing.

This is probably a bit tricky to see in the herringbone fabric, but the front of a buttonhole is on the left, and the back is on the right.  On the right you can see the interfacing on the wrong side of the cape front, and then the fabric patch which forms the buttonhole. 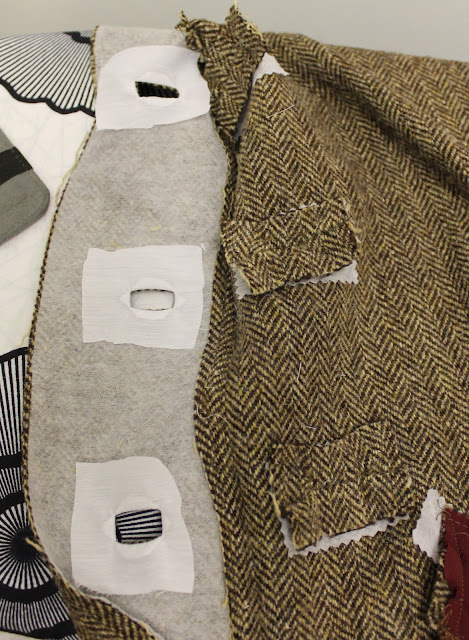 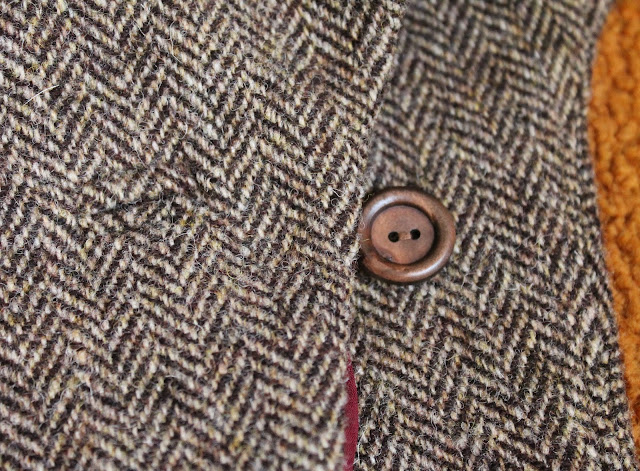 I used the Starlet Suit Jacket pocket pieces, and have finally got the hang of what to do the with little triangle bits!  Here's what the back of the finished pocket looks like. 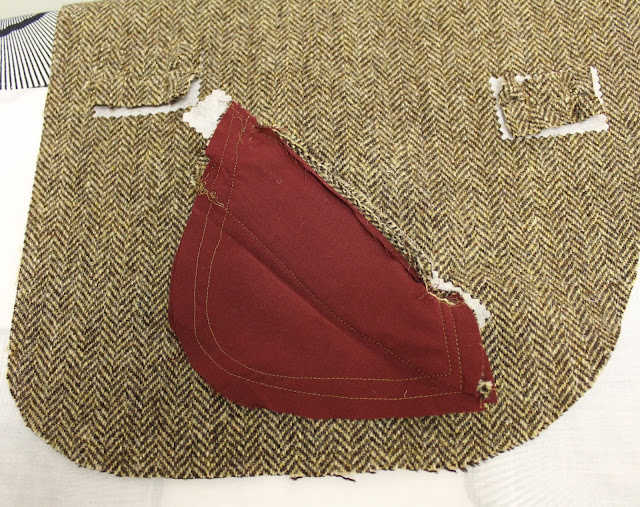 And here is the finished thing.  Words cannot express how much I love these pockets! 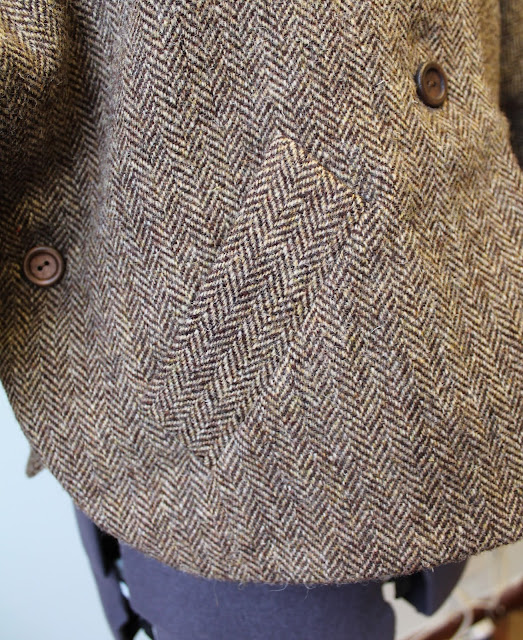 The fabric is some herringbone wool tweed from My Fabrics, and the lining is some peachskin from ebay.  The pattern calls for 1 metre of both, but I bought 1.5 metres of the wool which was enough for the facings, buttonholes and welts. 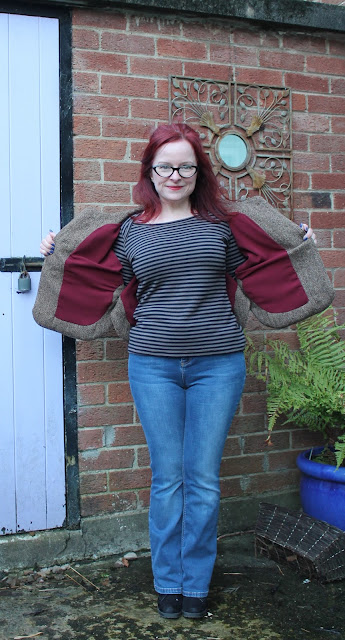 The lining was a bit of a faff to sew.  It was tricky to get the lining sewed at the underarm buttonholes (hence the puckers), but I'm happy with it. I had attached the facing first to finish the buttonholes, and had also understitched it.  The understitching really helped to get the facing to lay flat.  I tried to photograph it, but it was impossible to see in the fabric.  It seems that herringbone fabric hides a multitude of sins, including five different colours of thread! 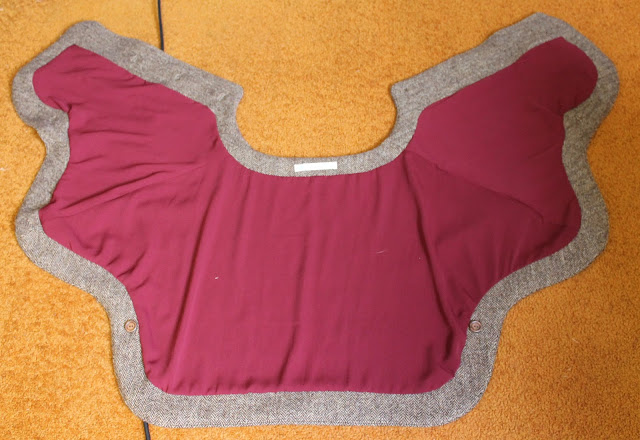 And it turns out that capes are all the go this winter.  Who knew?!  I saw a gorgeous one in a shop in Belfast last week, but it was £171!  It was shaped at the shoulders like this one, but curved in an arch down to the hem, which I think would be easy to do with this pattern. In fairness, the fabric was absolutely beautiful and was woven in Ireland, but I think I'll give it a miss! 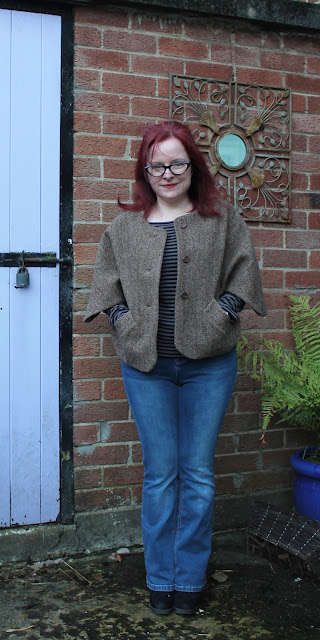