I've been procrastinating mightily over Belladone for a good two months; maybe three.  For some reason the thoughts of fitting the back was giving me the shivers, and I was getting cross with myself because I love this pattern; there are so many gorgeous versions of it on the blogs.  So I gave myself a good talking to, and just got on with it.  And you know what?  The back fitted out of the envelope.  Seriously! 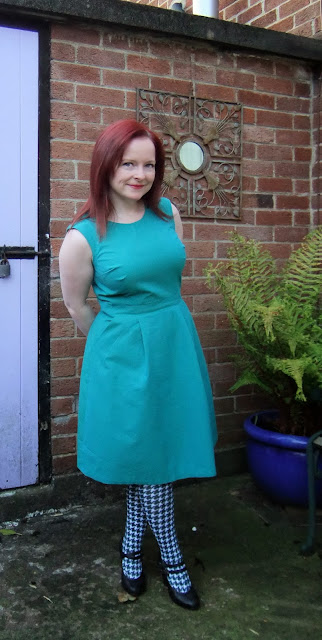 Now, if I'm really picky I would say the triangle bits at the back of shoulders are gaping slightly, but it will be easy to fix for the next one.  There's a tutorial on how to do this here.  My other mods were a FBA of 2cm, and I shortened the bust and waist darts by 1 inch.

My fabric is Interweave Chambray from The Village Haberdashery, the colour is called Lagoon.  It was £12 per metre, and I bought 2.5 metres.  It's lovely fabric, and was easy to work with.  When you look at the fabric really closely you can see that it's two different colours woven across each other.  The selvedge edge is the green. 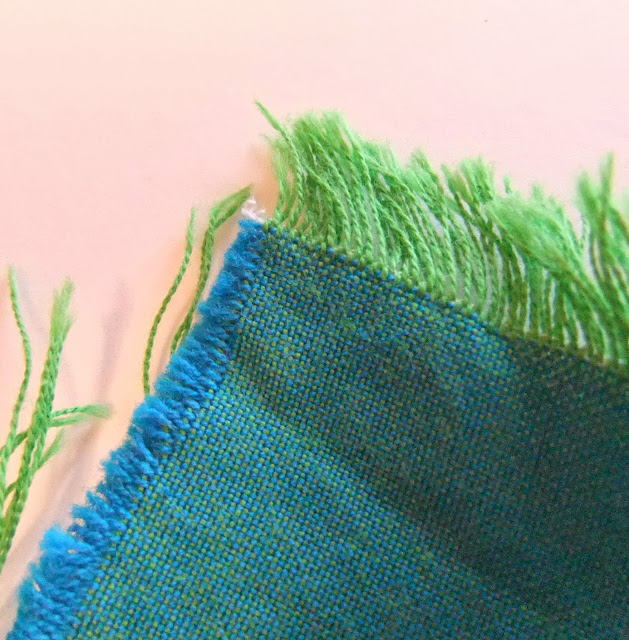 If you're using this fabric, I can recommend Gutermann 100% polyester thread Col 763 as a good match for the colour. 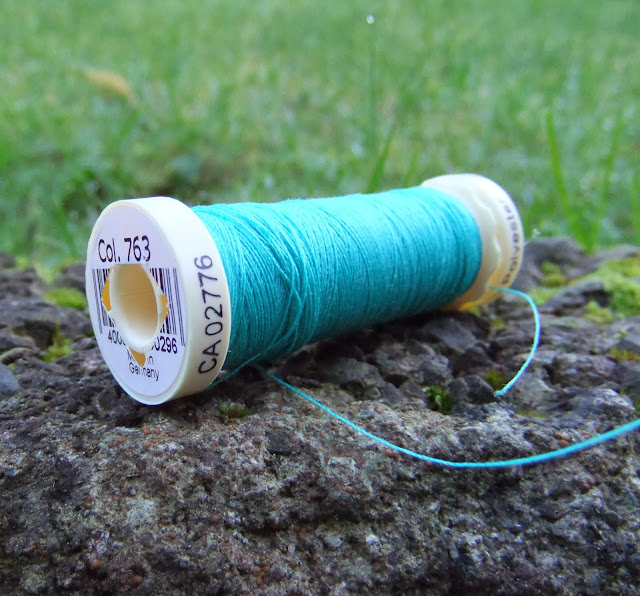 I had two issues with this: the first one was the bias tape.  I made the version that uses bias tape as an invisible facing,  The instructions on the pattern are a bit scant for the invisible bias tape version; I have them in front of me, and it doesn't say what seam allowance to use when sewing on the bias tape.  So I sewed my tape with a 5/8 inch seam allowance, trimmed it, and folded it over.   My tape was too wide at the centre back neck, and I had to fold it over twice so it wouldn't be seen.  With hindsight, I suppose I should have had the edge of the bias tape level with the edge of the fabric, and then sewn along the bias tape fold.  Anyway, it's not a big problem, and I can live with it.  By the way, if anybody did notice the seam allowance in the instructions, please let me know! 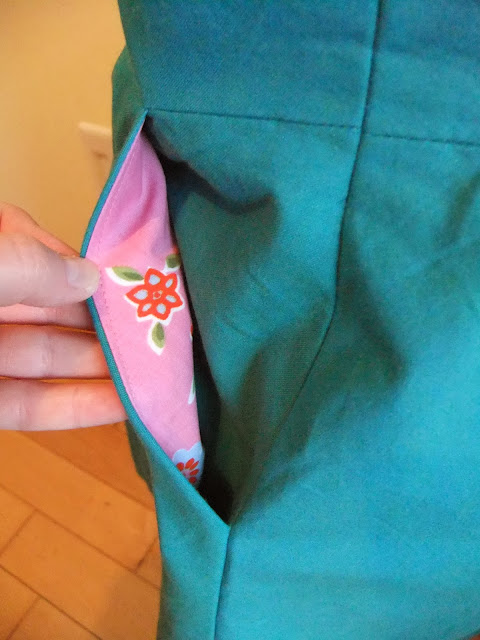 The second issue was entirely my own fault.  I'm going to get my excuses in before I tell you what it was!  There's been quite a bit of decorating going on in my house recently (which is now thankfully finished, and is lovely!), which is why I'm only getting around to blogging this now, when it was finished about two weeks ago. 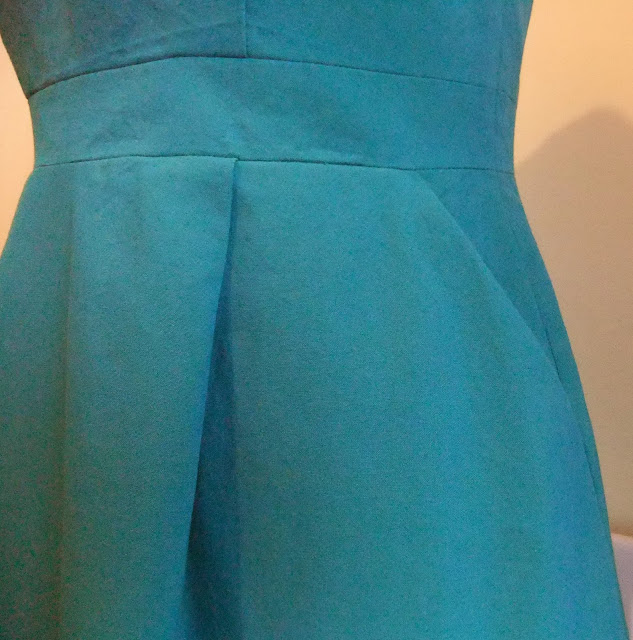 I was making the pleats on the front of the skirt, and I couldn't make sense of the instructions at all - so I winged it.  And you know how it goes with winging it - you win some, you lose some.  It wasn't until I had attached the bodice to the skirt that I noticed my pleats didn't look right.  Turns out I'd folded them to the inside, and not the outside.  I thought I could live with it, but then decided I couldn't, so I unpicked them.  I had another look at the instructions, which made perfect sense then, but then I sewed them wrong again!  I folded them to outside, and not the middle!  I got it right on the third go, but I am definitely blaming the paint fumes on that! 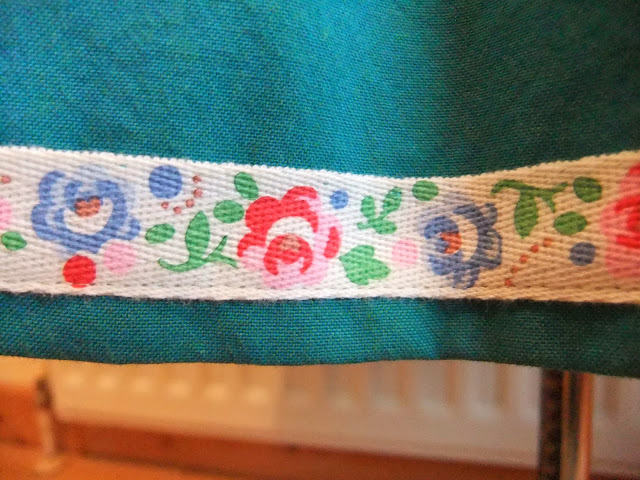 I didn't add the hem facing, and instead used this lovely Cath Kidston ribbon that my sister bought me. 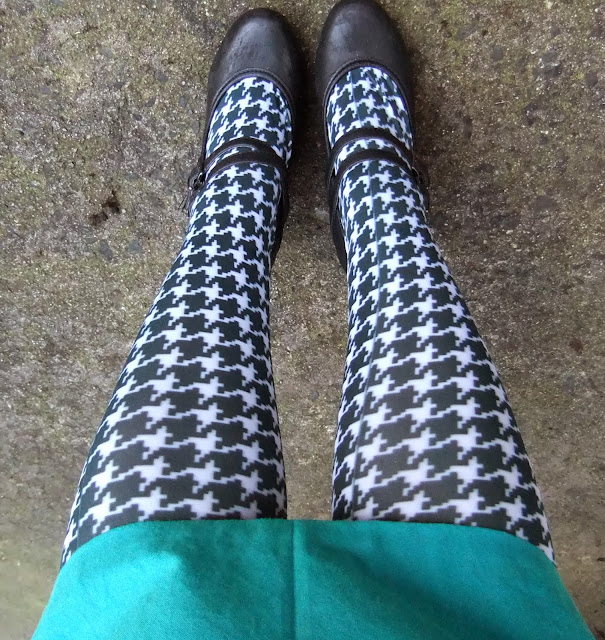 I've worn this dress twice now, and I do like it.  Today was it's second outing, and I wore it with my new obsession which is patterned tights.  These are Pamela Mann Small Dogtooth tights.  Apparently I have lost the ability to buckle my shoes properly and also straighten the seam in my tights.  I was in a rush to take my photos and get out of the house.  "More haste, less speed", as my Mum says!


All my Christmas crafting is finished - hurray!  So it's selfish sewing all the way to Christmas now.