FO: Sewaholic Daphne Thurlow Trousers - 2013 Sewlutions: In the jar is in the bag! ;)

My Thurlows are finished!  I am not the face of shame!  Hurray!  This was my challenge to myself for 2013 Sewlutions.  To re-cap, this was an idea from Karen at Did You Make That? for sewists to make a new year's sewing resolution to themselves.  The initial post is here, and Karen will be randomly checking with people throughout the year to see how they're getting on.  Here is my pledge, word for word:


Ho ho!! What a brilliant idea! I am in: and I want to make a pair of trousers, namely Sewaholic’s Thurlows. I have the pattern, and Santa brought a book on fitting trousers called “Pants for Real People”. How hard can it be?!…

This was an epic make; my biggest make so far, in fact.  But, I really enjoyed it.  There is a lot to talk about with these, so I'm going to break it down into sections.  The first thing though is that if you are thinking of making these, then follow Lauren from Lladybird's sewalong, it's brilliant: I've been stalking it for weeks.
I will apologise now for the grainy-ness of some of these photos: these are the second lot I took, the first lot were worse.

Fit
I think fit is the thing that puts most people off making trousers, and it certainly frightened me.  I can recommend Pants For Real People, but I think that ultimately I got really lucky with the fit on these (I think the Fitting Fairies owed me).  According to the pattern measurements, I was a 6/8 at the waist, and a size 0 at the hips.  This seemed a bit mad, so I traced out up to a size 8.  I made a toile, and the crotch fitted perfectly.  Seriously!  I didn't have to make one change, the height and length were perfect.
The outside seams were far to wide though, and got taken in to size 0 at the hips.  I also thought the legs were a bit wide, so took the outside seams in a bit more from just below the hip to the ankle.  I also shortened them at the knees by 2cm.
﻿
﻿﻿
Welt Pockets
I'm not going to lie, this was the bit I was most dreading.  This is where the sewalong came into it's own - here is the post on welt pockets.  I practised first on my toile, and the pocket turned out ok; but there's a bit, after the welt is cut open, that you sew down the triangles at the sides of the cut.  On the sewalong it says to firstly pin and then baste the triangle, and then sew it with a zipper foot.  Don't think you can fudge this with no basting and an ordinary presser foot - I tried: it dosn't work.  Thankfully that was on my toile, and I did it properly on the real thing - here is the result:


My first ever welt pockets!. Not too shabby, eh!  I am very pleased with them.  I extended the length of the inside of the pocket as on the sewalong here.  I added 4 inches of length overall, and in the above photo, the bottom of my seam gauge is touching the bottom of the pocket.


I thought when I got to the actual cutting of the welt that I would need something to steady my nerves, but I was concentrating so hard, I forgot I was cutting into the bum of my trousers.  Below is the insides of the back welt pockets (left), and the front pockets (right). 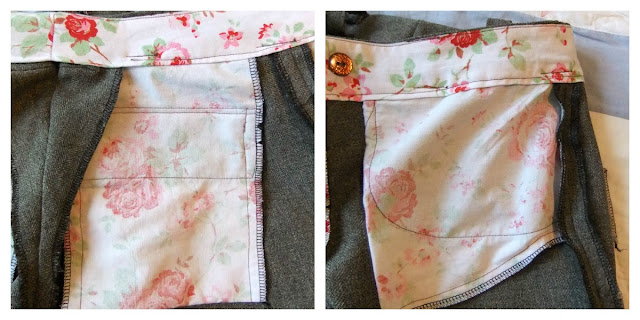 
With the welt pockets I could visualise what I was supposed to be doing, but with the fly zip I couldn't, for some unknown reason, so I was winging it and blindly followed the instructions.  Smart move, because it turned out ok.  Again, I recommend following the instructions to the letter.  The only problem I had was that once the zip was in, there was a gap between the bottom of the zip and the seam beneath it, but I was able to sew it up ok. 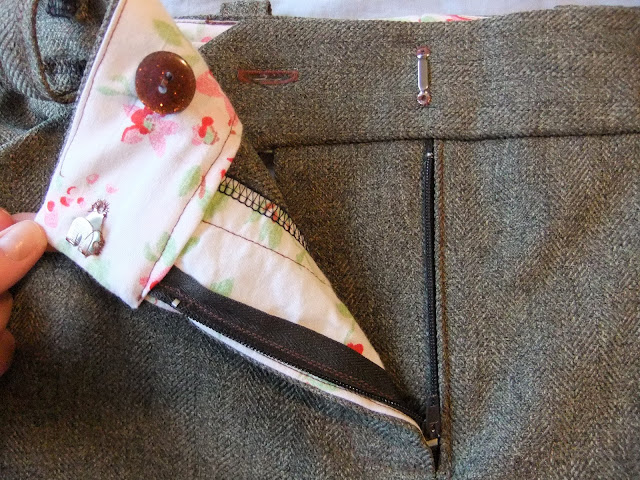 I think this happened because I hadn't sewn the seam up high enough, because it didn't occur to me that this is where the zip would end.  Sounds a bit stupid I know, but I'm blaming the welt pockets on using up too much brain power.


Waistband and Back Extension


Now, you'd think after the welt pockets and fly zip that the rest would have been plain sailing.  Oh no, the waistband was a bit of a nightmare.  Brain power reserves must have been gone completely.  The waistband is cut in two parts, and seamed at the centre back.
On my toile one of the waistbands was too short at the back, but because of the back extension there was plenty of seam room, so it was ok.  I had taken the waistbands off my toile to take in the side seams and forgot which side was too short.  I thought it was the left, and measured my traced pattern piece off the pattern, but it was ok.  Now, common sense should made me think to check the right side piece, but I didn't!  So I cut out and interfaced my main fabric, and then cut out the waistband facing.  Then I realised I'd cut the facing the wrong way round.  So I cut it out a second time, and cut it wrong again!  Third go was successful, but that was the end of the lining fabric.

I put the waistband together, and pinned it to the trousers, then I realised that it was the right side waistband that was too short!  Arghh!  By that stage I was getting a bit hacked off, and I think it shows in the scrappy folding and stitching at the bottom of the inside of the waistband.

I made the belt loops the length that is on the pattern, but I wish now I shortened them as on the sewalong, because they're a bit strange and loopy looking.  I also ended up having to unpick, and re-sew the back extension because the trousers were a bit wide at the back.

Hem
I put turn-ups in the hems, for no other reason than I like turn-ups. 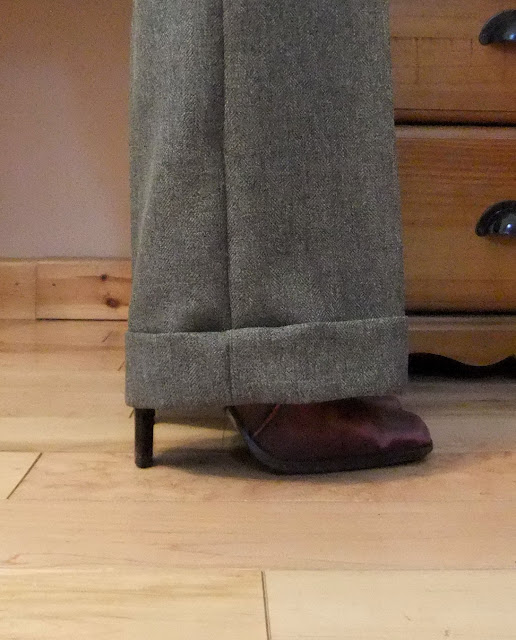 Issues
There is something weird going on with the very top of the side seams just above the pockets. No idea what that's about.  If anybody has, please let me know! 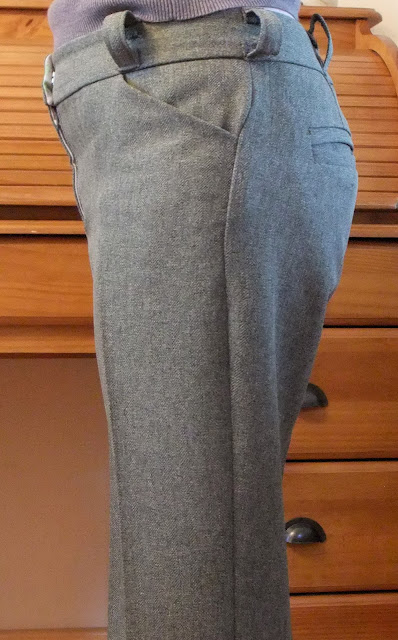 Fabric
The main fabric is a wool mix from Abakhan Fabrics; at least I think it's a wool mix.  It's not on the website anymore, and I'm fairly sure it said there was wool in it when I ordered it, but the content wasn't listed on the invoice.  But it's definitely more man-made than wool, and frayed like nobody's business.  That said, it's machine washable, which is handy, and holds a crease ok.  It was £5.20 per metre; I got 3 metres, and used about 2.5 metres (I haven't measured exactly how much I have left yet).  The fabric for the pockets and waistband is the remains of the Ikea duvet cover my sister gave me that I made Tilly's Picnic Skirts from.
Conclusions
I am over the moon with my trousers.  Even though they aren't perfect, I certainly didn't think they would turn out so well.  Also, it means that I have completed my 2013 Sewlutions challenge, and it's only the middle of February - yey!  I am not a competitive person at all, but I am so glad I took part in this because I know I would have faffed about for months, reading about trouser making and generally procrastinating, so this was the push I needed to just do it.  It's really improved my sewing confidence, and I feel that if I can make trousers, I can make anything.  And you know what, making trousers wasn't as hard as I thought it would be - and there will definitely be more Thurlows in my life.
If you've made it this far down this post, I congratulate you!  And you're probably wondering why I have called them Daphne Thurlow Trousers in the title.  In my head this style of trousers is called Daphne because of this photo: 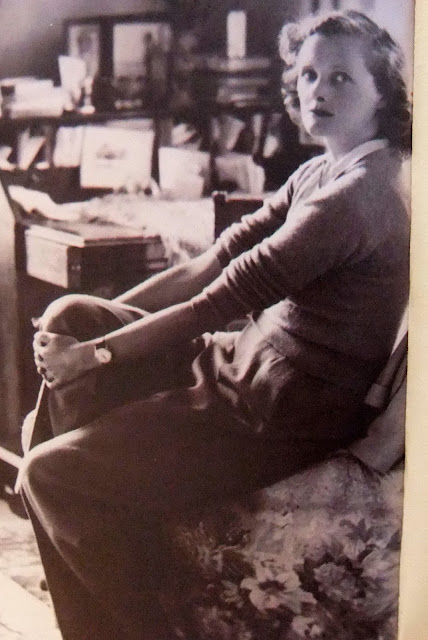 This is the author Daphne Du Maurier, who happened to write one of my favourite books called Rebecca.  I can recommend it: the housekeeper is a nutbag.  This photo is on the inside cover of my, now quite battered, copy.

In true Scruffy Badger style, I decided to try and copy the photo.


So what's my next sewing project?  Tilly's Mathilde Blouse of course!  Good luck to the rest of the folks who are In The Jar, and have a great weekend.