Gretel No2 is finished.  I can't remember if I've mentioned this before, but according to Ravelry, I cast it on at the end of December, and it took just less than a month to knit.  It's yet another Ysolda pattern (can you tell I like her patterns?), and the cables are divine. :) 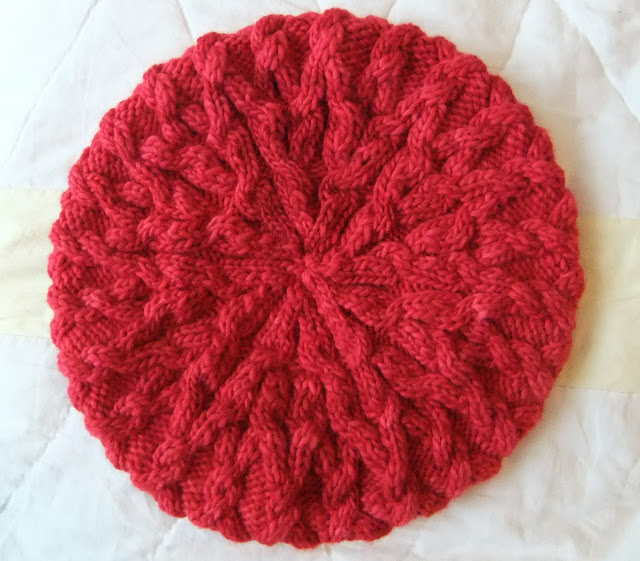 The yarn is Malabrigo Merino Worsted, and the colour is called Ravelry Red. I have two other red hats, but there's nothing like Malabrigo Merino for keeping your head toasty warm at stupid o'clock on a winter morning.  I also have a purple one (also Malabrigo) that I made a few years ago, and it's seen a lot of wear. 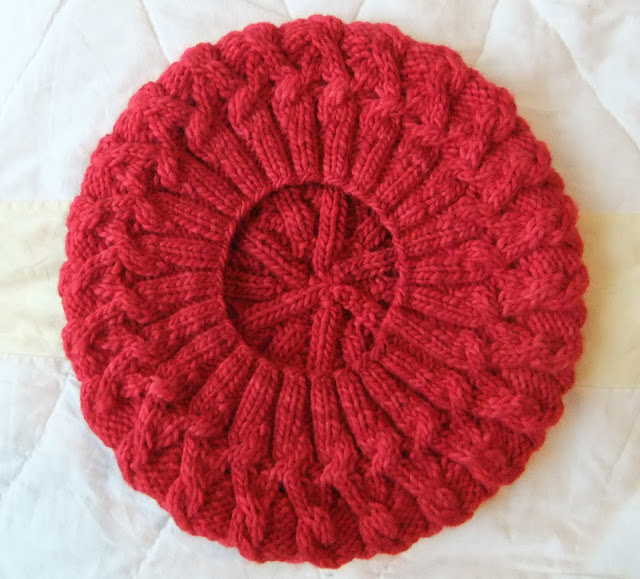 As with my purple one I made the Regular size, cast on with 3.5mm needles and used 4.5mm needles for the rest.  I didn't use the tubular cast-on because I find it too stretchy.  I used a long-tail cast-on, and started with Rnd 1, leaving out the tubular cast-on set up round.
For the increases the pattern just says M1, but doesn't give a specific type of increase.  On the first increase round I did a purl increase because the next stitch was a purl stitch, and I stupidly didn't read onto the next round.  Had I, I would have seen that my increase stitch was to be a knit stitch: my increases looked bad, so there was a bit of tinking involved.  Now, I appreciate nobody would have noticed this except me, but it would have always leapt out at me.  So I re-did the increases like this - with left needle, lift bar from back to front, and knit through front of stitch.

I also changed some of the decreases for no other reason that I thought mine looked neater - again, I appreciate I am the only person who will notice this!  I used k2tog tbl instead of ssk on the following rounds - Crown Decreases rnds 3, 9, 17, 19 and 22.  All my mods are on my Ravelry project page here.
In sewing news, I have made a start on my Sewholic Thurlow trousers.  I made a muslin, and took some photos of it, but they didn't come out very well.  I started the actual trousers yesterday, and have finished the front pockets; so, far, so good - here's a photo. 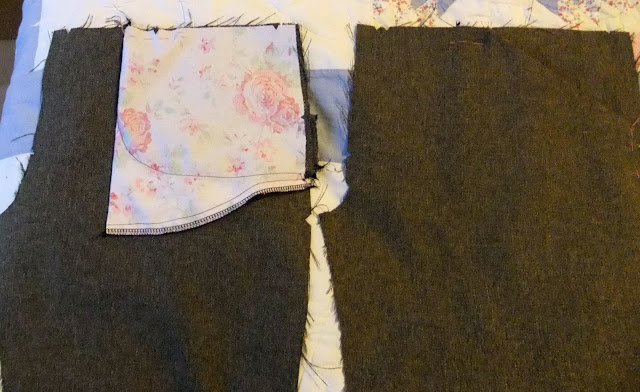 Today is welt pocket day.  Gulp!  Thankfully Lauren from Lladybird did a brilliant sew-along, which is currently my constant companion.  But first I am going to the gym - I have to build up my stamina for those pockets...
Lynne
Posted by Lynne at 10:23