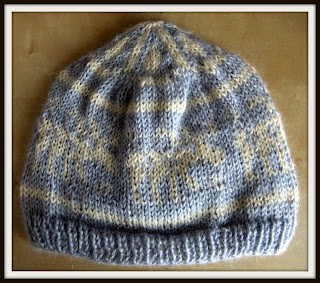 1.  Not loving the mooses, but my sister likes them, and it's for her.

2.  I didn't really like knitting the first one for the reasons below, and didn't want to have to knit this one.  For reasons on this - read on.

3.  I really don't like the shaping on the crown.  I've been having a look at some other hat patterns, and generally the decreases on the crown are either done on every row, or every other row.  On this pattern there are 15 rows to shape the crown.  The decreases are on rows 1, 2, 3, 5, 9, 11, 13 and 15, resulting in a weird pointy hat which is a headache to block.  I could of (and should of) changed it a bit, but I just couldn't be bothered!  I just wanted it finished!! 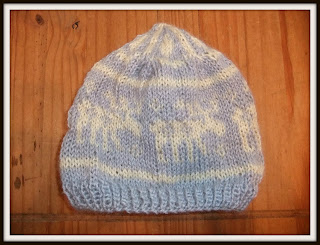 This is it unblocked.   Not much difference, is there?  I soaked it and pinned it to a towel, trying to pin the whole thing in an even curve.  Any other blocking suggestions will be gratefully received!

4. The tension on the pattern is mad, it says it runs a bit big, and it's not wrong!  I made the smallest size, which is for a toddler, and it fits my 21 inch noggin.  But I used the adult size for the rows.  I used 3.25mm needles for the ribbing, and 3.5mm for the rest.

5.  I preferred the yarn I used for the first one, it was Rico Designs Essentials Soft Merino Aran, and this one is Wensleydale Longwool Sheep Shop Aran.  Unfortunately I don't know exactly how much I used because when I went to weigh what was left, the battery was dead in the kitchen scales.

This, like the first one, is for my sister.  You may recall in this post near the bottom I mentioned that she lost it.  She accidently left it on the bus on the way to work.  She only realised once she'd got to work, so phoned Dad and made him go over to her house (which is nearby), and walk from her house to the bus stop (which isn't too far) in the off chance she had dropped it.  She phoned the lost property office, but it didn't turn up.

Now, I have to say that she absolutely loved that hat.  It was practically glued to her hat (or if it had have been, she might not have lost it!), and she was very proud of the fact that I had made it for her.  Even Mum had said to me about how much Sister loved it.  She was genuinely really upset when she lost it.  But I tell you what, if this one is lost, there will be no more!  Anyway, it's finished and I'm moving on!  We shall never speak of it again!

Here are my next four Smoothie Hats, which are much more pleasing: 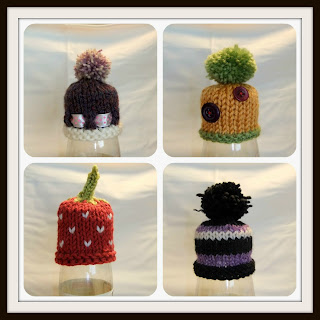