There's a lot of Christmas madness going on around here, and this is the first chance I've had to get caught up with my blog!. I had intended to work to 6pm tonight, but then I caught myself on and came home at my normal time.  I finish on Friday, and I'm off until 2nd Jan.  Hurray! :)

I have finished my sister's hat, but obviously I can't post a photo just yet.  It turned out to be the right size, so I didn't have to frog it.  Phew!

The Christmas tree has been put up. We got a real one again since the real one we got last year was so lovely.  A certain member of the Blackbeard household doesn't seem to be able to keep his paws off it though! 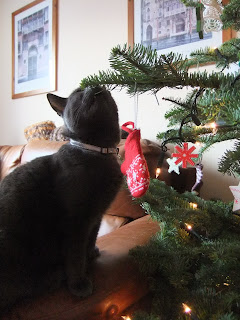 I didn't make that mitten, by the way, I bought it in B&Q.  He only seems to be interested in the decorations that I've made.  I'm not sure whether to be pleased with this or not!  There has been some damage: I give you Exhibit A - 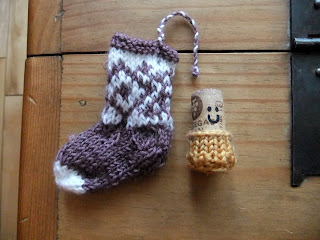 I made three of these little stocking last year (here's the pattern), and he broke the hanging plait on this one.  Then this year I made three of these little cork men.  The pattern is called Korknisse.  The one in the photo has lost his hat - I still can't find it - I had to make another one!  There is also a little bear that I made last year who has now parted company with his hanging ribbon, so I'll have to fix him later.  Grrr...

I have also been making myself a Gap-tastic Cowl.  I had seen Tasia's version on Sewaholic, and thought it was lovely; but it wasn't until I saw Chrissy's version on Stitched Together, that I thought, "That's fabulous!  I need one of those - now!".

I am awarding myself extra bonus knitting points because I am using stashed yarn. :)  I'm using Adriafil Mistero chunky yarn.  I have three skeins of it, one had been made into a neckwarmer for a Christmas present, but I wasn't feeling the love for it, so it got frogged.  Here's how it looks now: 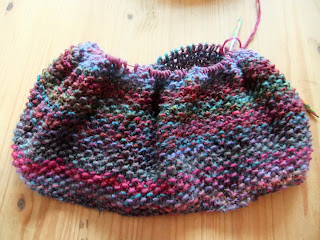 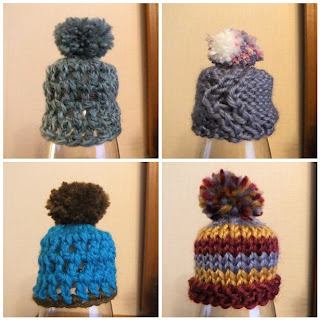 I hope everybody has a lovely Christmas, and I shall look forward to seeing all the knitting pressies on everybody's blogs.