I can now reveal my sister's hat: 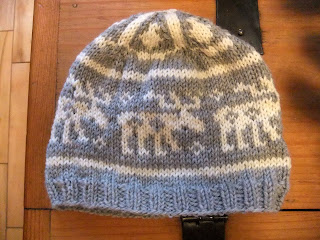 To say she was pleased with it is an understatement!  She, and Mum, thought it was fantastic.  The pattern is called Moose in the Woods.  I also made her some Owlings fingerless mittens.  She didn't know about them, so when she saw them I was even more brilliant. 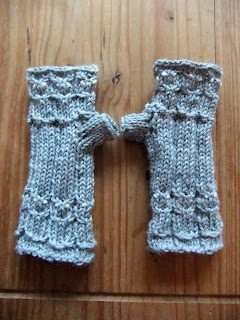 I had intended to use beads for the Owls' eyes, but my beads were really small and difficult to see when I sewed them on, so I used some of the cream yarn from the hat.  But, I tell you what, I nearly lost the will to live sewing on all those eyes.  I thought I'd never be finished!

I hope everybody had a lovely Christmas.  I had a great day, one of the highlights was that it didn't snow.  We were reminiscing about last year when we were having our dinner.  This time last year we had about 5 inches of snow, the pipe to the washing machine had frozen, and the temperature was something stupid like -8!  Yesterday the temperature in my car was +12, I had to take my gloves off because my hands were too warm!

Yet again, the best part of my dinner was the stuffing, it's just so tasty!  And Santa brought me a woolly present: 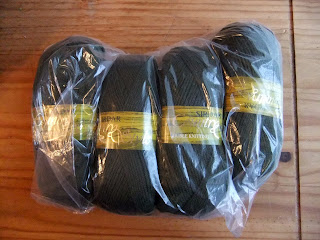 It's Sirdar Country Style DK.  I've used this yarn before, and like it a lot, and it's machine washable.  The colour isn't showing very well in this photo (the plastic bag doesn't help), but it's a lovely dark green.  It's going to become a cardigan.  I haven't definitely decided on a pattern yet, but I have a few in mind, and have already been swatching with some of this yarn that was in my stash.

I also treated myself to this book when I was ordering some presents on Amazon: 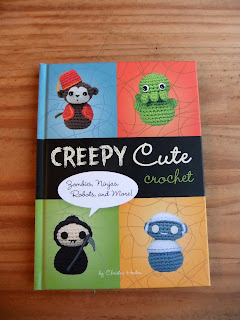 I stumbled across it on Ravelry.  I feel that every home needs a crochet Grim Reaper!  I called into my LYS last week to get some white, pink and black aran acrylic, but they didn't have any black, so I'll see if I can get some on ebay.

And I have also cast-on Almost Ovals scarf.  I'm using some Violet Green 2ply that I bought earlier this year; it's gorgeous - 50% silk and 50% merino.  I had intended to make something else with it, but it stubbornly refused to be the right tension.  Then I saw Josiekittens' version, and the decision was made. 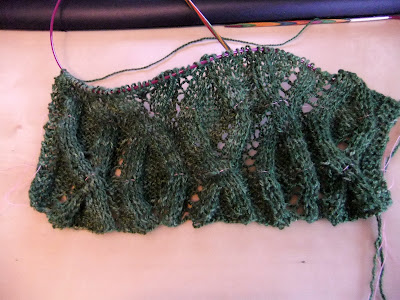 There was a bit of a false start caused by me not reading the chart properly!  But once I got a few rows done and could see the pattern emerging, it's been going great.  This photo is the end of the first pattern repeat.  The pink thread is my lifelines.  This photo does not do the colour justice at all, it's a beautiful rich emerald green.

I have also finished my Gap-tastic cowl, but I don't have any photos of it yet.