I have matched action to word from my last post, and this morning I finished the Plum Cabled Hat.  Goodness me, this hat is great!  I foresee much wearing over the winter, and there are no itching issues.

Here is a link to the pattern, it's a free one on Ravelry.  I changed one thing on it, which was the direction of the cables on Row 14.  I swapped the two cables around, so C2B was first and C2F was second.  I just liked the way it looked.

I appreciate it's a bit difficult to see the cables in the photos: 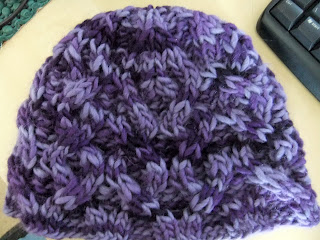 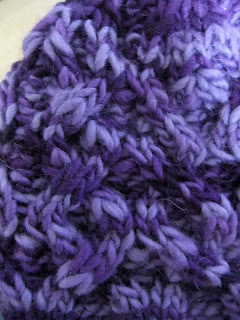 I have been attempting to make a cover for my sewing machine for a while now, and it's not going well.  This could have a lot to do with the fact that I am making it up as I go along - never a good idea.  I thought some bias tape would make a good edging for it, and this would also give me good experience in using bias tape.  I found a great tutorial on making continuous bias tape here.  I made some yesterday, and it went well, but I have discovered this afternoon that it is too narrow.  Argh!

It is now going into the naughty corner/top of the printer to have a think about what it's done.  Thankfully I have enough fabric to make some more, but it was a fiddly job, so it may be left for a while.

So here are some things that were successful - my next four Smoothie Hats. 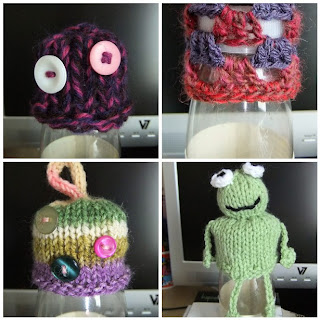 I know I've already shown you the crochet one, but isn't the wee froggy great?!  I found him on Ravelry here, and there is also a crochet version here.  The original pattern doesn't have arms for him, but I thought he looked a bit wrong without them, so I just made two more legs and sewed them on.  And, just because he's so great, here's a close-up of him! 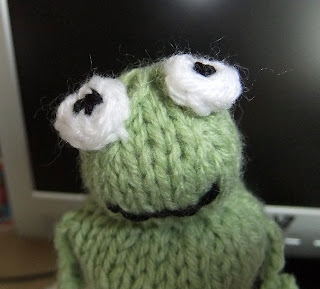 I have to say, I love this new version of Blogger, it's so much easier to use.  I just noticed it when I logged on to type this, although it could have been there for ages.