I can finally reveal the mystery knitting; here it is: 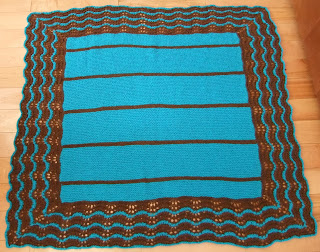 It's an Ysolda Hap Blanket, which I made for my twin sister. It was our birthday on Friday, and she loved it! Her exact words were, "it's the best blankie ever!!". You can't say fairer than that.

I was quite relieved because when I started it, it was one of those things that seemed like a good idea at the time. She has always liked mine (blogged here), and had asked me to make her one in April. I said if she did the garter stitch in the middle, I'd do the edging, but she's left handed and always found knitting awkward, so she said no. That was when I had the bright idea to make it for her birthday.


The turquoise yarn is Patons Dipolma DK, and the brown is Wendy Ascot DK. It came from the yarn mountain I inherited from my Granny, so the yarn is as much my sister's as it is mine.


Mods: I doubled the size of what is on the pattern. It's all on Ravelry here. 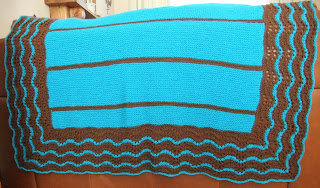 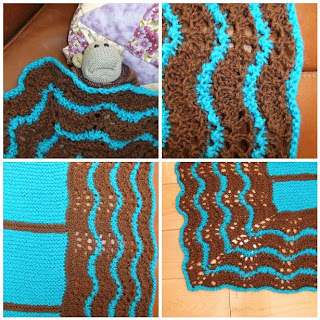 I have cast-on the second Circle Sock, and I decided on starting the Gretel Top from my list. My tension square was a lot smaller than given on the pattern, so I opted for the second size on the pattern, so I'll see how it goes. I haven't got too far with it though because I got side-tracked with other things.

One was my front garden; I was off work this week, and my Dad came over and helped me re-shape the grass and dig new flower beds. Who needs the Gym when you can dig in four bags of manure in one day! Phew!!

The second distraction was my birthday pressie from Mr Blackbeard. He brought me a dress form. I got it on Monday, and seriously don't know how I lived without it! Want to see? 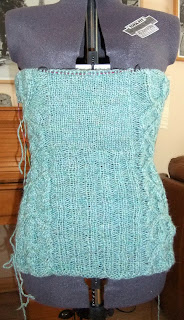 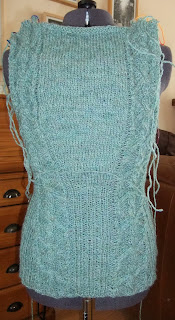 "Ahh," I hear you ponder, "that knitting looks vaguely familar". Well, it's the Menai Vest Top that has been languishing in the naughty corner for months. I put it on the dress form on Monday, and fell for the cables again! Sadly they don't show very well in the photos. I have finished the back, front and one armhole, so the rest should be finished this week.


I've also just been using the dress form to take-in two skirts, one being the purple skirt I made. I was quite generous with the ease on it. Expect to see the dress form featuring a lot from now on!