As with the rest of the UK, the snow has hit Northern Ireland too. Here's the view from the window to my right as I type. 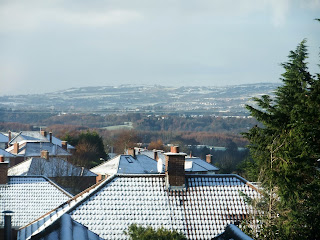 It's strange snow, it looks like tiny polystyrene beads. We've only had about a quarter of an inch though, I've seen it worse.

I have to show you this Crimbo Deccy my sister gave me yesterday. 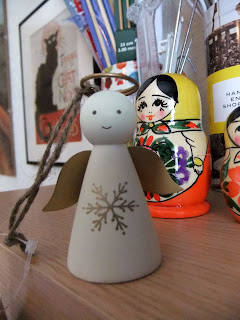 She got it in Marks and Spencers, she got one for both of us because she said it reminded her of Bod.  For those of you who aren't children of the 70s, Bod was a children's show which was a big hit with me and my sister.
Wee hats
I'm keeping up with my one hat a week for next year's Big Knit. Here are my next four. I did the purple and pink one this morning. It was inspired by the winter. I feel a Smoothie bottle would like a big chunky hat today. 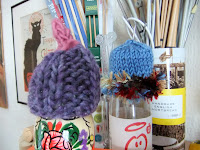 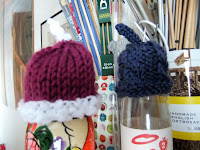 My Peaks Island Scarf is coming on beautifully. Here it is: 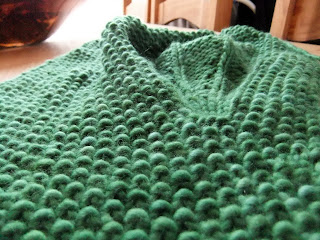 I've been wearing my purple one all week, and not only is it lovely and soft and warm, but it's been receiving lots of lovely comments.

I'm off to have some soup, and do some more of my scarf.