I've come over all domesticated...

... and decided to do some cooking! This doesn't happen very often around here - I'm not known for my culinary abilities! I decided to make the two things I can make from scratch: Stew, and Leek and Potato Soup (I can also make Chilli, but since this requires packet mixes and tinned stuff, I don't think it really counts). Here are the results: 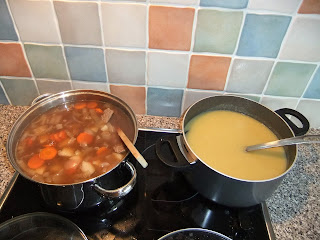 I have to say, I'm feeling quite proud of myself. The soup is delicious, I had some for lunch. The stew is still, well, stewing! Although it should be ready soon, it's for my dinner. I've made loads so I can freeze some of it.
On the knitting front, I have some bad news about the red Manu cardigan. It got frogged on Sunday night. It was just too big. But I still really love the pattern, and have found some advice on Ravelry to make it a bit smaller. So I'm going to start it again tonight.

I have finished a sock though. I don't think I mentioned it in my last post. This is some of the yarn I got in Dublin. It's made by Wendy, and is called Happy. At first it was making me anything but happy! It's sort of splitty and slippy. But, I've got used to it now, and quite like it's softness. From memory I think it's 75% bamboo and 25% nylon. I finished sock 1 last night - here it is: 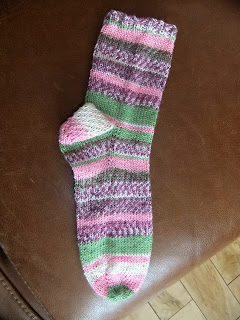 I'm using a pattern from Socks From The Toe Up by Wendy Johnston. I'll cast sock 2 on later.

I have sent off my little hats for The Big Knit. I think I made 28 in all. Here are the last four. 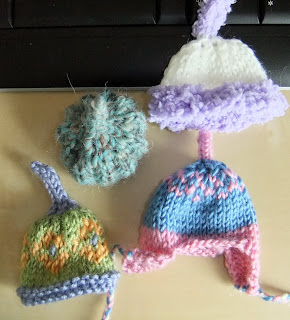 I've decided to try and make one hat a week so I will have 52 to send off this time next year. No.1 was made on Sunday night to cheer myself up after the frogging.