On the Belfast SnB group on Ravelry, we've had a thing called Single Skein September. As it's name implies, you use that lone remaining skein to make something lovely.

As I need no encouragement to make yet another beret, here is my contribution. It's Gretel
by Ysolda. I used Malabridgo Worsted Merino which was left over from another Ysolda project.

There are three versions of the pattern: beenie, regular and slouchy. I had intended to go with slouchy, but didn't have enough yarn. Just as well, because regular is pretty slouchy on my wee head! 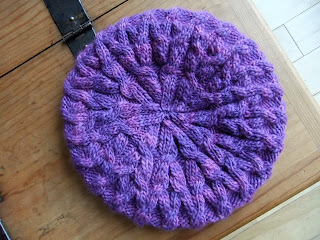 I came across a beautiful shrug on the Phoenix Forum. It's called Layering Shrug
and I thought it would be perfect for the Manos Del Uruguay 2 ply I bought in Dublin. It's made all in one piece. It starts with a provisional cast-on, then you do the first few inches of the start of the cuff (this took me two goes). Then you cast-off, pick up the stitches from the provisional cast-on, and keep going on the sleeve.

Below is what I've done so far. It's probably about 3 or 4 inches long, and took me about 8 hours. To say it's completely doing my head in is an understatement. :(

It's all done in the round, and I've having trouble with the magic loop. Now: I'm a huge fan of the magic loop, but I'm finding the stitches at the ends of each half are pulling terribly. So I decided to change to DPs. Big mistake! Some of the stitches fell off one of the needles just after a YO round. Disaster!! :(

But I really love the pattern, and I know it will go with lots of things. So I've decided to put it aside until I've finished something else, and then I think I'll give it a go working it flat. 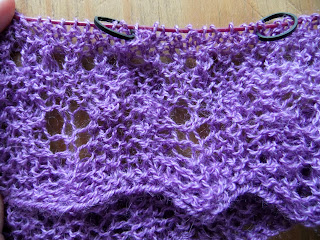 And here is the something else. This has been in my queue for a while. It's a cardigan called Manu
(the second one down). It's by Kate Davies, and I'm using some DK from my Granny's stash.

This is coming along beautifully. The whole body is knit from the bottom up to the under arms (I finished that bit yesterday). Then you make the two sleeves (sleeve one pictured below). The sleeves are then joined to the body, and the shoulders are shaped using short-rows. The pattern is beautifully written, and I'm enjoying making it. 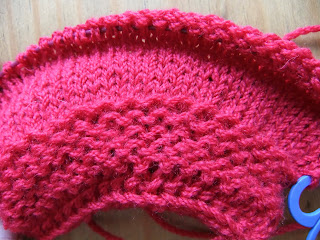 I've been having a big clear out, and was sorting out my stash last weekend. I came across some gorgeous pale blue DK Merino which came from my Granny. It's beautifully soft, but unfortunately pale blue is not my colour.
Then I was idly flicking through Whimsical Little Knits by Ysolda, and came across this. It's called Hap Blanket, and is based on traditional Shetland Shawls.
Well, you can never have too many TV blankets, so I cast it on. I'm using some Wendy DK (also from my Granny) as the contrasting colour. The pattern calls for heavy aran/chunky, so I'm making it twice the size for a really big blanket.
Here's the progress so far: 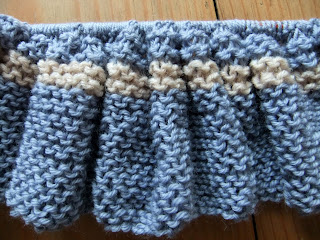 It's nearly time to send in the hats for The Big Knit. Here are mine. I had intended to make a lot more, but it just didn't seem to happen. Although, I have cast another one on whilst I've been waiting for my computer to upload my photos onto Ravelry and my blog.

They have to be in for Friday 15th October, so I think I'll post mine next week. 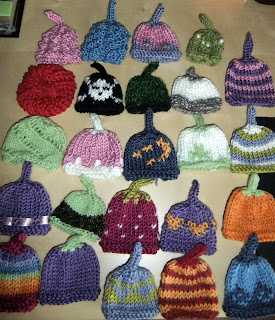