A Virtual Tour Of Belfast

I have only one FO to my name, and a not very good photo of it. Also, all the WIPs are, well, still WIPs, and not very exciting; but that's for another post. So I thought I'd take you on a virtual tour of Belfast.

At the start of June my lovely friend (who used to live here) was visiting from England, so she, my sister and I went on an open-top bus tour of the city. There are several bus tours on the go, we went on this one and I can recommend it.

It was raining when we got on the bus, but then the sun came out.  Spare a thought for Belfast now. I'm not a big fan of heatwaves, but as the sun is splitting the stones in the south of the UK today, we are basking in what we like to call "liquid sunshine". The rain hasn't stopped all day, no gardening for me. :( 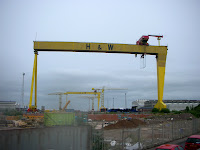 Anyway, this first photo is of the cranes in the Harland and Wolff Ship Yard. In it's heyday, the Ship Yard in Belfast employed thousands of people (including one of my Great Grandfather's), and was one of the biggest Ship Yards in the world. The most famous ship build there was the Titanic. The area around the Ship Yard is currently being re-developed, and the Drawing Office where the Titanic was designed will be a Visitors Centre. These cranes were built in the 1960s by a German Company called Krupps, and are still in use. They're called Samson and Golith (no, I don't know which is which!). They are a real landmark in Belfast, and the first thing you notice when flying into the Harbour airport. When I see them, then I know I'm home.

This is Parliament Building in East Belfast, where the Northern Ireland Assembly (our local government) sits. The 6 pillars in the middle represent the 6 counties of Northern Ireland. There are 365 windows in the building, it is 365 yard long (one window and yard for every day of the year) and 52 yards wide (one for every week). It was painted black during the Second World War so it wouldn't be a target for bombing raids. Also during WW2 it was used as a base to direct operations in the Atlantic. 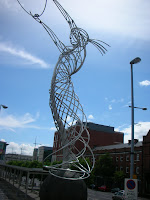 This is a sculpture which was put up in the last few years. It's in the centre of Belfast, right beside the river. It has a name: the tour guide on the bus told us, but I instantly forgot it. I just call it what everybody in Belfast calls it - The Doll on the Ball.

This is Belfast's very own leaning tower. You can't tell from this photo, but it really does lean! It's the Albert Clock, which is at the bottom of High Street in the City Centre. It was built to commemorate Queen Victoria's husband, Prince Albert. That's him standing on the front of the clock tower. The earth under Belfast is heavy clay (I know: I've dug my garden). Over the years the clock has subsided, causing the lean. About 10 years ago, the clock was cleaned and under-pinned. It now has 21st century foundations that won't subside, but the lean wasn't able to be corrected. Just as well, because it's part of the clock! 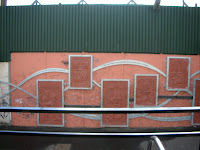 I can't show the good sides of Belfast without showing the not so good sides. I'm sure you are aware of at least some of the political history of Northern Ireland, and these next 2 photos show some of it.
In various areas of Belfast, where there has been unrest, peace walls have been built. The idea is to stop both sides getting near each other, so they can't do any damage. This photo is part of the peace wall off the Shankill Road, a Protestant/Loyalist area in North/West Belfast. Since the Ceasefires it's became a Tourist Attraction! People from all over the world write messages of peace on it (you might just be able to see the dark writing on the pink paint). It's most famous visitors include President Bill Clinton, and the Dali Lama. 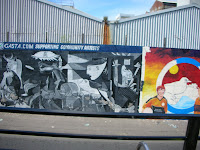 Belfast is famous for it's political murals, and these are the most famous on the Falls Road in West Belfast. This is a Catholic/Nationalist area, which is divided from the Shankill area by the peace line in the photo above. The peace line and these murals are about level with each other on the two roads, but are divided by only a few hundred yards as the crow fly's. These are only 2 of many murals on the road, and they are updated regularly.

This is Queens University in South Belfast. It was designed by a man called Charles Langon, who designed many of Belfast's older buildings.

This is the Europa Hotel in Belfast, which is in the City Centre. It's either the most bombed hotel in Europe, or the World. I can't remember which! 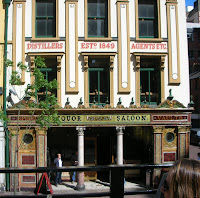 This is the Crown Bar, which is directly facing the Europa Hotel. It's quite a famous bar in Belfast, and is the only Public House to be owned by the National Trust. I'm not much of a drinker, so unfortunately I can't tell you if it's a great place to go! I was in it once about 4 years ago and it was quite dark and dingey, but I think it has recently been refurbished. 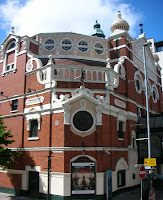 This is the Grand Opera House, Belfast's Victorian Theatre. It's beside the Europa Hotel. It is even more elaborate and beautiful on the inside. There is an extension to it, which I deliberately did not photograph, because it's the ugliest thing ever! There was a whole hoo-ha when the extension was built a few years ago. 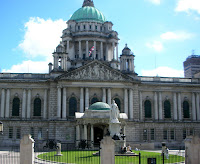 And finally, this is the City Hall, right in the centre of the City. It too is even nicer inside. It was re-furbished recently to celebrate it's centenary, but I haven't been in it since it re-opened. It now has a tea room which is supposed to be lovely, so I should make an effort to investigate! The grounds around it are lovely, and in the summer folks who work nearby go and have their lunch there.

Well, that concludes my virtual tour; I hope you enjoyed it, and I didn't bore you senseless. The normal knitting blog will resume, hopefully with some FOs!

PS I can't get some of the photos to line up, so they'll just have to do as they are.