I finished my Peaks Island Hood scarf yesterday, blocked it last night, and sewed the buttons on this morning. Here it is: 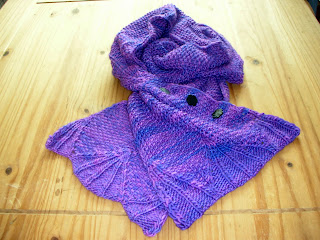 And here is one of the buttons. They are from Craftworld in Belfast. 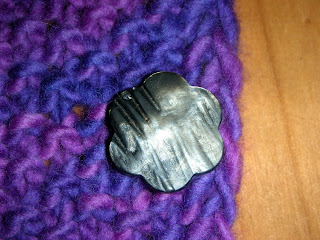 I think the last thing I finished was a hat around Christmas. I feel like I've achieved something now I have finished this!

I got to 10 rows before the end, and ran out of yarn, so had to order a third skein to finish it. I didn't bother swatching it (which isn't like me!), because I thought, it's a scarf - I don't need too! So maybe if I had swatched, I could have got away with 2 skeins. I only used 9 grams of number three though, so have 91 lovely grams left. I think I'll make a hat with it.

What can I say about this yarn?  Malabrigo Merino is the most gorgeous thing in existence! I think everything in the world should be made from 100% merino. Even the cat, Luke Spookling, agrees. Here he is sleeping on top of it while it was being blocked. I had folded the towel in half over the top of the knitting. Two cats and blocking knitting don't mix. He must have been able to feel the squishiness through the towel! 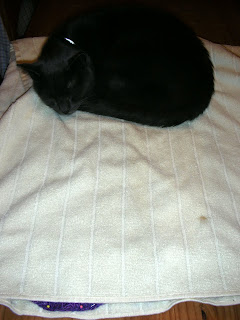 
I've been working on the cardigan again. I am now calling it "The cardigan of doom". :( I've finished the collar, but I think it's too wide for my wee shoulders. I'm hoping frogging a few rows will fix that. I also frogged the button bands and the bottom part of the body, so I'm working on that bit at the minute.

Least said, soonest mended. I take my hat off to all the sock knitters out there! I've finished the heel, but my decreases look strange, and don't have as many stitches as I should have.

I sooo want to cast on something new, namely the Rose Red Beret by Ysolda. I am blaming Northern Monkey on this entirely! I have some purple Wendy Merino DK which would be perfect for it, but the cardigan must be finished first!
Posted by Lynne at 14:02