The Cardigan of Doom is finished

But now it's called the Cardigan of Loveliness, because it's turned out rather well (even if I say so myself!). I ended up frogging the collar and re-doing it with less stitches, and it definitely looks better than it did before. But I don't think I took a photo of the original collar.

I'm so glad to get it finished because it was really starting to get on my nerves. The sleeves were the only parts that were never frogged. I really do love it though now it's finished, and I can see me wearing it a lot. Even Mr Blackbeard was impressed!

I have some purple aran I got for Christmas that I want to make Ysolda's Liesl cardigan with, but I think I'll leave it for a while. I'm not in the mood to start another big project just yet.

These photos are pants, I will take some better ones during the week and put them on my Ravelry page. 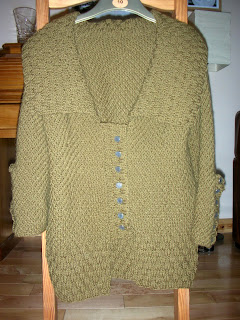 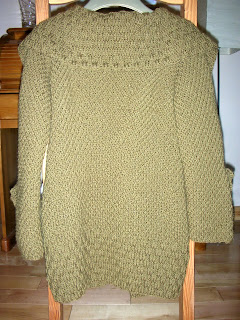 Socks
Sock number two has been started. I used a cable cast on, and cast on less stitches, and I think I'm a few rows past the ribbing. I take back what I said about not "getting" sock knitting, I think I'm being sucked in! In answer to JosieKittens comment about starting my slide down the slippery slope of sock yarn stashing; ummm, yes.
Hats, hats, hats,
I started this blog to post patterns for The Big Knit hats, and haven't done any for ages. I'm blaming the cardigan on this! I have a few patterns written out, and a few ideas for more, but just haven't done anything with them yet. I will try and make an effort to do some this week. But first I want to cast on my Rose Red Beret...
Posted by Lynne at 18:24